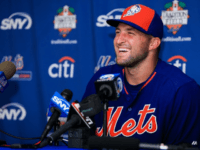 St. Lucie Mets outfielder Tim Tebow made an elderly woman’s day by telling her hello and wishing her well. Tebow was signing autographs Saturday before his game against the Tampa Yankees when a fan asked him to deliver a message to his grandmother, Margaret. “What’s up, Miss Margaret? It’s Tim Tebow. I hope you’re having a great day. God bless,” he said. The video then cuts to Margaret, who got emotional watching the former Heisman winner talk to her. “That’s something,” she said. “That’s something to hear him say your name.” Per Sporting News, Margaret suffered a stroke in March and has been recovering since. Follow Trent Baker on Twitter @MagnifiTrent