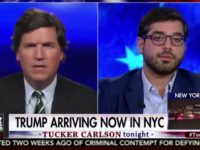 Breitbart London editor in chief Raheem Kassam appeared on Fox News’ Tucker Carlson Tonight speaking on the subject of his new book, No Go Zones: How Sharia Law is Coming to a Neighborhood Near You. Kassam told Tucker that many politicians in Europe had no investment in the future of the continent because they have no children themselves.