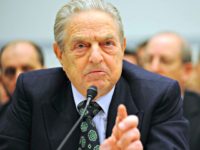 Left-wing billionaire George Soros, known for his global political influence, is reportedly upping his lobbying efforts in the U.S. — pouring significantly more money into pushing Congress to back his legislative goals in 2017. According to the Washington Free Beacon, disclosure forms suggest that the big money donor is upping his efforts to influence policy via The Open Society Policy Center — a D.C. based non-profit.  According to the Free Beacon, the organization spent nearly as much on lobbying in the first half of 2017 as it did in the entirety of 2016. So far it has spent at least $4.6 million on lobbying, according to forms filed with Congress and has three in-house lobbyists tasked with lobbying Congress, the National Security Council, the Pentagon, and the State Department. The group has lobbied on issues ranging from nuclear defense to U.S.-Hungary relations — particularly the Restricting First Use of Nuclear Weapons Act of 2017 and the National Defense Authorization Act for FY 2018. Over the course of the year, the group has significantly broadened the issues on which it is lobbying. At the beginning of the year, it was lobbying on three issues — by June it was lobbying on 17 issues.