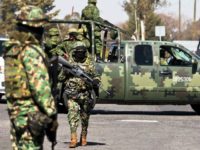 REYNOSA, Tamaulipas — Cartel gunmen incinerated three of their suspected rivals in an ongoing war for the past three months that led to more than 137 confirmed deaths in this border city. The bodies were found near one of the many industrial parks–it remains unclear if the victims were alive when torched.