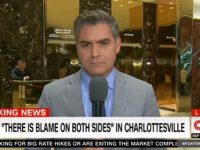 On Tuesday’s broadcast of CNN’s “Situation Room,” CNN Senior White House Correspondent Jim Acosta stated that during his press conference earlier in the day, President Trump took views on Confederate monuments that were “almost white nationalist-lite,” and will be taken as a sign that the president “needs to go back to History 101.” Acosta said, “The president has an issue…when he is challenged on something that he feels deeply personal about. He doesn’t seem to have the ability to reign things in. … And president trump demonstrated here in the lobby of his own building. He couldn’t feel more at home than he could feel here at Trump Tower. He has talked about it time and time again, that this is his home. And yet, he felt very comfortable espousing some views that are — very, I mean, I would say they’re almost white nationalist-lite, in that, he was complaining, bemoaning the removal of Confederate statues across the country and asking whether or not George Washington and Thomas Jefferson are next.” He continued, “You could go to just about any history professor at any college in America, you could go to any history teacher at any high school in America, and