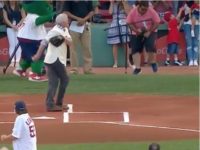 Wednesday’s ceremonial first pitch at Fenway Park did not go as planned for one unlucky photographer. Boston Red Sox fan and Ewing’s sarcoma survivor Jordan Leandre, a high school pitcher, threw the first pitch way over the catcher’s head and right into Eagle-Tribune cameraman Tony Capobianco’s groin. Capobianco bent over in pain. Later, Leandre joked about the errant pitch. Had to get him off the plate somehow 🏻‍♂️ — Jordan Leandre (@Jordan_BBS) August 16, 2017 Capobianco got a nice shot the pitch right before it got a nice shot of him. My camera man @TonyCapobianco is the poor guy that took that first pitch in the McNuggets. Here's his view of it coming in. pic.twitter.com/NVD70hiIn2 — Chris Mason (@ByChrisMason) August 16, 2017 (h/t FTW) Follow Trent Baker on Twitter @MagnifiTrent