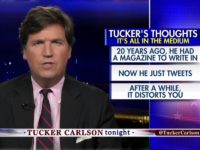 Wednesday on his Fox News Channel show “Tucker Carlson Tonight,” host Tucker Carlson responded to attacks for a monologue he gave a night earlier on his show about the backlash against monuments created for various American historical figures from former Weekly Standard editor Bill Kristol. Kristol made his comments about Carlson on Twitter, to which Carlson blamed the medium of Twitter for the knee-jerk responses from Kristol, a former boss of Carlson. They started by rationalizing Trump. They ended by rationalizing slavery. https://t.co/1BYhLF9YQY — Bill Kristol (@BillKristol) August 16, 2017 Next: Luther, Voltaire and Marx were anti-Jewish. So why's it a big deal that the marchers were chanting, "Jews will not replace us?" https://t.co/1BYhLF9YQY — Bill Kristol (@BillKristol) August 16, 2017 Transcript as follows: Last night the top of the show, we addressed the removal of Civil War monuments from public places around the country. We made the point that the sudden outrage over Confederate icons isn’t entirely about slavery, horrifying as slavery is. It’s also part of a larger effort on the left to discredit the founders of this country and the beliefs they enshrined in law. Once you believe that any figure in history who once owned slaves is