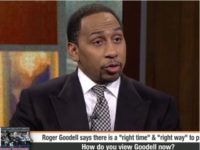 On Tuesday’s ESPN “First Take” broadcast, co-host Stephen A. Smith blasted NFL Commissioner Roger Goodell for saying there is a “time and place” for protesting. “Roger Goodell is not the man to make that statement,” Smith stated. He continued, “I’m going to say something that’s going to be controversial. I don’t give a damn. No white person has the right to tell black folks when you should protest about something. Because usually protests that emanates from the black community is due in large part because of the transgressions exacted against that community by those who don’t happen to be black.” Smith later said he does not “recall too many white people being accurate and on point as to when and how you should protest.” Follow Trent Baker on Twitter @MagnifiTrent