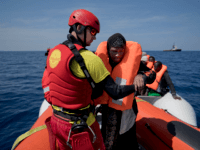 MADRID (AP) – Spain’s maritime rescue service has saved more than 600 migrants trying to cross the Mediterranean Sea from Morocco in the past 24 hours, making it one of its busiest days so far this year. The service said it rescued 16 migrants early Thursday in the Strait of Gibraltar, a narrow passage that separates Spain from Morocco. On Wednesday, its vessels rescued 601 migrants, including two in a canoe and six in a beach paddle boat. The service said of the 601, 432 migrants were rescued in the Strait and 169 further east in the Mediterranean. Some 550 of the migrants were from Maghreb countries of northwest Africa and the rest from sub-Saharan African countries. More than 9,000 migrants have reached Spain by sea so far this year, more than the total for all of 2016. The International Organization for Migration said one reason for the increase could be that the Mediterranean Sea crossing from Libya to Italy is seen as increasingly dangerous, due to lawlessness in Libya and stepped-up patrols by the Libyan coast guard. More migrants also reach Spain during good summer weather. Tens of thousands of migrants from Africa attempt the perilous sea crossing to