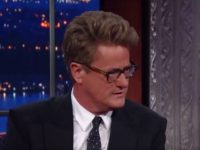 On Wednesday’s broadcast of MSNBC’s “Morning Joe,” co-host Joe Scarborough argued that President Trump has also become the president of the white nationalist movement. Scarborough said, “The United States is — we’ve — sometimes it’s been painful, but we’ve been in a constant, long march towards equality. And yesterday, it’s almost as if the president held up a stop sign and stopped history in its tracks.” He added, “[N]ot so strange is the fact that you had David Duke and other white nationalists actually praising the president of the United States yesterday for his words. And why not, he has now officially become the president of the white national — not only of America but also of the white nationalist movement. David Duke saying, thank you, Mr. President, for your ‘courage to tell the truth about Charlottesville[.]’ Well, David Duke, neo-Nazis, white supremacists, Klan members, they stand on one side, and apparently, the rest of America and the world stands on the other, Willie. The president has chosen sides, and it is very clear, not only morally — especially morally, but also politically, he has chosen the wrong side.” Scarborough concluded that lots of Trump’s voters didn’t want “a Duke