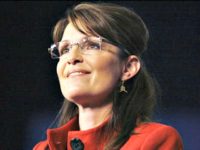 Tuesday on Fox News Channel’s “The Story,” former Gov. Sarah Palin (R-AK) discussed reports that close to 100 percent of expecting mothers in Iceland terminated their pregnancy after receiving a positive test for Down Syndrome. She called it “intolerance for people who may not look like you,” adding it was “so wrong” and “so evil.” Palin said, “We couldn’t get through all of it all of the report without my heart just absolutely breaking because this intolerance for people who may not look like you is just so — it’s so wrong. It’s so evil. And here Iceland is such a beautiful country. When I was governor here I met with the president of Iceland, and we talked about our beautiful regions of the world and hard working people with such great hearts and I think Iceland won’t be so beautiful if they continue down this path of being so intolerant to the degree of trying to snuff out the life of most those who maybe do not look like the subjective view of someone that would equate to perfection.” She continued, “You know when you consider that a Down syndrome child, their skin is a little bit different. Their