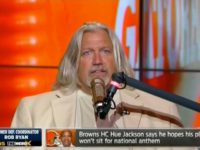 Former assistant NFL coach Rob Ryan said Tuesday that Americans need a dose of being proud of our country and supporting the president. Ryan, the twin brother of former Buffalo Bills and New York Jets head coach Rex Ryan, added on Fox Sports 1’s “The Herd” that people need to stand for the national anthem because it is respecting the country’s flag and those who died for it. “I think in the national anthem is for our entire country,” Ryan told host Colin Cowherd. “You know, my father served in the Korean War. I was brought up to respect the flag, respect the veterans, you know, they’re giving up their life for this flag.” “I think the whole country needs a dose of, ‘Hey, let’s be proud of our country. Let’s stand behind our president. Let’s do things. Do we have other issues? Absolutely we do. Now’s not the time to do that. This is the national anthem. It’s not just each sideline standing up for the national anthem, it’s the entire stadium, all right. You’re standing up for America, you’re standing up for the flag and everybody should do that,” he continued. Follow Trent Baker on Twitter @MagnifiTrent