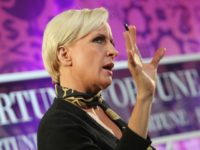 Incensed over President Donald Trump’s response to Charlottesville, Morning Joe co-host Mika Brzezinski said “blood and carnage” will be on Trump’s hands if he is not removed from office via the 25th Amendment. “White House cabinet and staff must speak out, step down or act decisively or it will be on their hands too. #itistime,” she tweeted on Wednesday. “With his own words TRUMP has created a permissive climate for violence. The blood and carnage will be on his hands. #shame.” She had previously tweeted: “Is it time? #25thamendment #GodBlessAmerica.” Brzezinski is referring to this provision in the 25th Amendment: Whenever the Vice President and a majority of either the principal officers of the executive departments or of such other body as Congress may by law provide, transmit to the President pro tempore of the Senate and the Speaker of the House of Representatives their written declaration that the President is unable to discharge the powers and duties of his office, the Vice President shall immediately assume the powers and duties of the office as Acting President. If the president objects, then Congress has an opportunity to remove him if two-thirds of both houses determine that the president is “unable to discharge the powers and