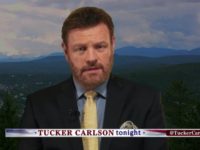 Wednesday on Fox News Channel’s “Tucker Carlson Tonight,” conservative commentator Mark Steyn made the case that some tech giants that have the ability to regulate the flow of information on the Internet may have grown to be too big. Steyn indicated he agreed with host Tucker Carlson, who earlier in the week said Google should be regulated like a public utility and added that if Standard Oil was too big in the early part of last century, then the same case could be made for Google. “I think what you said last night, Tucker, is absolutely right. I don’t see why, if the United States government thinks in 1918 — not 1918, I think it’s about ten years before that, 1909, whenever it was. Standard Oil had gotten too big. If Standard Oil was too big in 1909, yes, what is Google now? And there’s a difference. The oil companies, or MGM when they both made movies and owned cinemas, they’re basically in the movie business.” “Standard Oil is in the oil business,” he continued. “Google is in the fourth business. When you have someone who is actually in control of ideas who knows the data of just about all seven billion