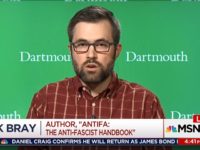 On Wednesday’s “MTP Daily,” author and Dartmouth University lecturer Mark Bray expressed support for Antifa’s confrontation tactics by arguing that Nazism had to be stopped by force and self-defense is necessary in today’s context. Bray said that the modern Antifa movement comes out of movements against Nazism and fascism in the 30s and movements in the 70s and 80s in Germany and the UK where immigrants, leftists, and punk rockers had to physically defend themselves against neo-Nazis. He added that their main perspective “is essentially that, rather than simply waiting for the threat to materialize, you stop it from the beginning. You say, ‘No platform for fascism.’ And that’s what we’re seeing with the attempts in Charlottesville and elsewhere.” When asked if he supported this kind of confrontation, he answered, “Yes, I am.” Bray further argued that far-right movements grow “by becoming normalized, by not being confronted, by being able to present themselves as family-friendly and respectable. So, part of the reason why the alt-right called themselves ‘alt-right’ is to present that mainstream image. And the opposition that people showed in Charlottesville really marred and tainted that. So, I think that by showing up and confronting it, it prevents the ability