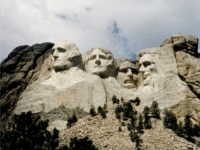 I agree with Laura Ingraham and Pete Hegseth. It is only a matter of time before the left comes for Monticello, or Mount Vernon, or indeed Mount Rushmore. Never content with their destructiveness, wait until they learn the history of Mount Rushmore. Not even 1,000 Confederate statues would draw the same outrage. The 60-foot high sculpture in South Dakota — depicting Presidents Washington, Jefferson, T. Roosevelt, and Lincoln — was sculpted by a Ku Klux Klan member. Prepare for the onslaught. Gutzon Borglum originally worked on the Stone Mountain project, which one Democrat candidate has already demanded be permanently vandalised in an attempt to erase American history. As AJC News reports: Removing the faces of Jefferson Davis, Robert E. Lee and Stonewall Jackson would take a monster of a sandblaster and require a change in state law. The Georgia code has a clear mandate for the memorial, saying it should be “preserved and protected for all time as a tribute to the bravery and heroism of the citizens of this state who suffered and died in their cause.” How befitting then, that the totalitarian left should come for the Shrine of Democracy next. After all, the Nation of Islam has already