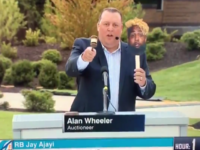 ESPN aired a segment on Tuesday in which they held a fantasy football auction, using staged images of real NFL players. Many of the staged images were of black players, and nearly all those bidding on the players were white. Leading some to say the scene resembled a slave auction. The network has since apologized for the segment, saying they understand how some could believe that the scene too closely resembled a slave auction.