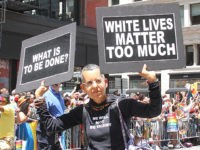 The tragedy in Charlottesville could have been an occasion to stop and consider how the tolerance for politically correct violence and politically correct hatred is leading the nation towards civil war. Instead, the media and the political left have turned this incident into the biggest fake news story of the summer, transforming its real lessons into a morality play that justifies war against the political right, and against white people generally.