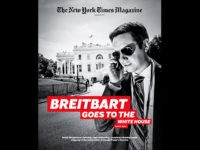 An extensive study that professors and data scientists at Harvard and M.I.T. conducted has concluded that Breitbart News does not represent the “alt-right,” undercutting the legitimacy of left-wing activists, Democrats, reporters in the legacy media, Never Trumpers, and establishment Republican bobbing heads and mouthpieces who rushed after Charlottesville to reflexively smear, malign, and defame Breitbart News as an “alt-right” outlet associated with white supremacists and Nazis.