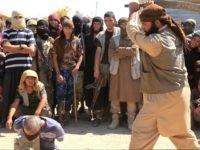 TEL AVIV — The Islamic State is releasing an increasing number of propaganda photos and reports about the territory of the caliphate and the fulfillment of “the commandments of sharia,” apparently in a last-ditch effort to woo supporters around the world and recruit them to its ranks as fierce battle rages in the Raqqa district, where the organization’s so-called capital city is located.