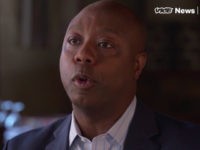 During an interview with Vice News on Thursday, Sen. Tim Scott (R-SC) said President Donald Trump’s comments on Tuesday about the violence that took place last week in Charlottesville, VA have “compromised” his “moral authority.” Scott said, “I’m not going to defend the indefensible. I’m not here to do that.” He continued, “His comments on Monday were strong. His comments on Tuesday started erasing the comments that were strong. What we want to see from our president is clarity and moral authority. And that moral authority is compromised when Tuesday happens. There’s no question about that.” Follow Pam Key On Twitter @pamkeyNEN