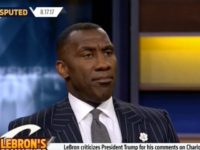 During a Thursday debate about Cleveland Cavaliers forward LeBron James saying President Donald Trump has made hate “fashionable again” in America, Shannon Sharpe took it a step further, blaming the president for the Charlottesville protests and saying he has made open and blatant racism okay. Fox Sports 1 “Undisputed” co-host Skip Bayless said he believes Trump “gave legs” and made it “newsworthy” to hate a certain group of people. “[W]hat President Trump has done is he made it okay to be openly and blatantly racist,” Sharpe replied. “[H]e made it okay to come from behind those cloaks.” Follow Trent Baker on Twitter @MagnifiTrent