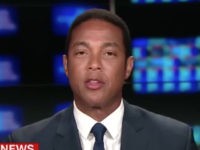 Wednesday on CNN’s “New Day,” network host Don Lemon said after President Donald Trump’s statements on the violence in Charlottesville, VA, anyone who continues to work for the Trump administration “is complicit in their racism as well.” Lemon said, “Can we stop beating around the bush here? Let’s be honest. Us New Yorkers, we’ve known who Donald Trump was for a very long time. We’ve known about the Central Park Five. We’ve known him with the housing discrimination. We’ve known—with him and the pushing the whole birther thing, which is a bunch of bull. We know why he’s so upset, so obsessed with Barack Obama. Barack Obama was a black president. Maybe he didn’t think that Barack Obama was fit to be in office. He traded on racial animus and racial BS and has been doing it for decades, and we’re going to sit here and pretend that we’re surprised?” He added, “How can anyone defend what the president said yesterday? It is indefensible. I can’t believe people get up here on CNN and on other networks actually try to defend—especially African Americans and Jewish people—and try to defend what Donald Trump said yesterday. There is no defense for what he