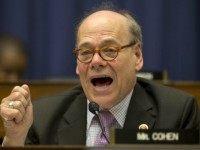 Thursday, on MSNBC, Rep. Steve Cohen (D-TN) said President Donald Trump should be impeached because he “can’t discern the difference between a domestic terrorist and a protester.” Cohen said, “Well, there has been a thought in the Democratic caucus that the president will hang himself. And he’s certainly doing a real good job of it, and that we should let him do that. I have been tempted to introduce an impeachment resolution. … I will be introducing my own impeachment resolution.” He added, “What happened in Charlottesville showed that the president can’t discern the difference between a domestic terrorist and a protester. He can’t distinguish between citizens, Americans who are objecting to abhorrent behavior of Klansmen and Nazis and Nazis and Nazis and Klansmen. That demonstration in Charlottesville reminded me of Kristallnacht in 1938 in Germany. It reminded me of Klan rallies with the torches. Those people were yelling, ‘Jews will not take our jobs.’ They do not like African-Americans. They don’t like Jews. They don’t like America.” Follow Pam Key On Twitter @pamkeyNEN