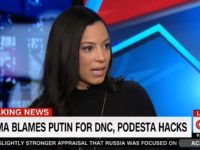 On Thursday’s broadcast of CNN’s “At This Hour,” CNN Political Commentator Angela Rye argued that statues of slave owners, whether they’re of George Washington, Thomas Jefferson, or Robert E. Lee should come down. CNN Political Analyst and Daily Beast Editor-in-Chief John Avlon who had referred to comparisons between Washington and Robert E. Lee as “idiotic” and stated that Confederates tried to claim Washington. Avlon also argued that there is no comparison between the Confederacy and Washington because Washington tried to unite the country and the Confederacy tore it apart. Later on, Rye said, “I think that we have to get to the heart of the problem here, and the heart of the problem is the way in which many of us were taught American history. American history is not all glorious. And even though I love John to death, I couldn’t disagree more about George Washington. George Washington was a slave owner. And we need to call slave owners out for what they are, whether we think they were protecting American freedom or not. He wasn’t protecting my freedom. I wasn’t someone who, my ancestors weren’t deemed human beings to him. And so, to me, I don’t care if it’s