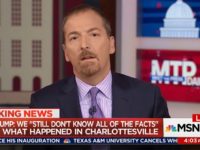 On Tuesday’s edition of MSNBC’s “MTP Daily,” host Chuck Todd argued that President Trump painted white nationalists as victims and defended their cause. Todd said, “Folks, what I just saw gave me the wrong kind of chills. Honestly, I’m a bit shaken from what I’ve just heard, and suspect it’s not just me. Moments ago, at Trump Tower, the president of the United States painted white nationalists and members of the alt-right as victims of what he described as club-wielding members of the alt-left. It was a chilling mix of whataboutism, false equivalence, and a total muddying of the waters, after one person was killed and at least 19 people were injured when members of the KKK, neo-Nazis, and white supremacists protested the removal of a Confederate statue in Charlottesville. Where to begin? You might as well start with the president painting these white nationalist protesters as the real victims of a violent left-wing movement.” He added, after playing a clip of Trump’s presser, “Sure, when violence breaks out like what we saw this weekend, there’s usually more than enough blame to go around. But when was the last time you saw a president of the United States defend the