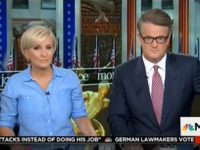 Morning Joe co-host Joe Scarborough was caught lying about White House Chief Strategist Steve Bannon on Thursday morning. Scarborough’s lie–telling his viewers and panel that Bannon had called President Donald Trump a “blundering fool” when Bannon never said that–was so blatant and obnoxious that he was called out by a conventional media reporter who has been on a roll of late publishing unfavorable stories about Bannon.