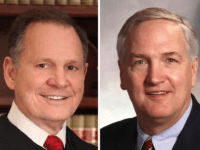 Former Alabama Supreme Court Justice Roy Moore and Sen. Luther Strange (R-AL) emerged Tuesday from a field of nine candidates in Alabama’s U.S. Senate special election Republican primary and will face one another in six weeks for the GOP nod. The winner of that runoff will face former Clinton U.S. Attorney Doug Jones, who handily won the Democratic Party’s primary by a nearly 40-point margin over business executive and former U.S. Navy officer Robert Kennedy, Jr. With over 90 percent of the vote counted, Moore was hovering around 40-percent mark, seven points ahead of his runoff opponent Strange. At his victory party in Montgomery, Moore noted that efforts from outside groups to influence the outcome by giving a boost to Strange did not work. “The attempt by silk-stockinged Washington elitists to control vote has failed,” Moore said during the opening of his speech to his supporters. Strange offered only brief remarks at his event in Birmingham and reminded his supporters he had gotten President Donald Trump’s support. Strange: "Let me thank the president of the United States, Donald Trump. He loves the people of Alabama." — Dave Weigel (@daveweigel) August 16, 2017 Rep. Mo Brooks (R-AL) finished third with 20